After I have mention several times different corner motifs I think it´s time to explain "this" in detail.

The term means the painting in all four corners of the tile, which changed during the centuries according to the contemporary fashion. Here now is an overview about the characteristic motifs:

In the 16th century the Italian majolica technique, completed by Spanish-Moorish influence, characterized the pattern of tiles between 1570 and 1635.

At this time Moorish ornaments (for instance the palmette, also called: "cogwheel") were predominant as well as the Italian quarter rosette.

The corner motif were painted in reserve technique. That means that the white tin-glaze was left "reserved" as pattern in the dark (blue) painted background.

Already about 1610 you find the first polychrome corner motifs in style of the Burgundy (or French) lily.

From approximately 1620 on the tile painters, inspired by imports of chinese porcelain, started to decorate tiles in the typical blue an white colour. 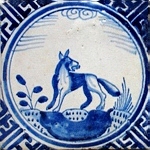 About the same period the ox-head can be found for the first time.

By the end of the first quarter of the 17th century the painters began to decorate the corners with leaf motifs, e.g. the naturalistic painted vine or oak leaf. But you also find more stylized leaf patterns, especially the so-called winged leaf.

Even the motif of three dots was created in that time (also called sign of the "Holy Trinity"), modified from the ox-head and leaf,

as well as the volute, a "C"-shaped pattern consist of "C"-shaped scrolls, used from 1625 to 1670, and of course different types of quarter rosettes, now no longer painted in reserve.

Towards the end of the 17th century some geometric corner motifs on powdered ground came up, which shall remind to the reserve technique, such as the quarter rosette, the quarter circle, the quarter star and the heart.

At the beginning of the 18th century further motifs joined, like the carnation, several other kinds of leaves, for example the quarter shamrock, .

The ox-head and the spider are by far the most commen corner motifs in the 19th and 20th century.Nearly the same applies to the on flower vases tiles painted modified fretwork.

The pattern of corner motifs from the same type changed over the centuries. You can see that for example at first for the ox-head. Starting from 1620 (sometimes even from 1610 on) this corner motif looked different than that smaller motif starting from the second half of the 17th century, which was designed even much thinner in the 18th and 19th century.

The same effect can be noticed, if you look at the spider, which had more flourishes still in the 18th century and however the shape of a small four leaved flower in the 19th and 20th century.

a choise of typical corner motifs